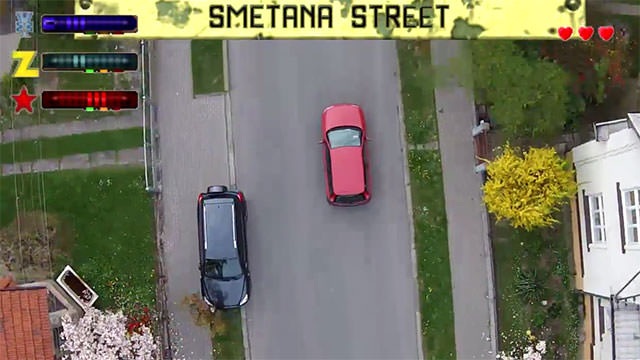 Grand Theft Auto is one of the highest grossing and most successful video games ever created on any platform. In the latest version, GTA V, which was released in April 2015, the graphics and visuals have become so stunning (even on 4K screens at 60 FPS) that many critics have found themselves at a loss for words.

But like (most) video games, there was in fact a time when GTA didn’t look all that amazing – a time when limited 2D aerial views were pretty much all that users had to settle with as they cruised, crashed, robbed, assaulted, and ran from the cops.

Throwback To The Views Of Yesteryear

The video, uploaded by YouTube user vojta paul and simply called ‘GTA 2 LIVE’ has already garnered nearly 1 million views since being published on May 2, 2015. Although the user did not include any description of the project, YouTube commenters quickly identified him as being from the Czech Republic, where he apparently created the film with multiple other unknown people (friends?) from the country. More interesting, perhaps, is that vojta paul only appears to have uploaded a single other video filmed by drone before achieving this smash hit, along with a few dozen slapstick comedy pieces including one involving an Orthodox Jew and a Nazi soldier, among other bizarre concepts.

The film comes at a time when drones are in the news practically every single day, from military attacks, to mail delivery, to consumer hobby projects. In a vast number of cases, videos filmed using drones often employ GoPro products, a fact that has lead the company to develop their own consumer drones, which will be for sale later in 2015.