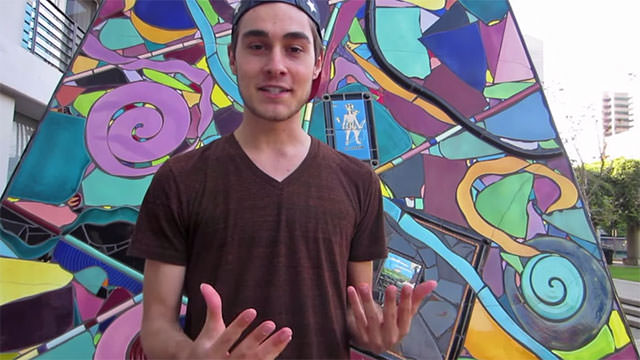 Below is an exclusive CollegeTimes interview with Luke Eilers, who has developed a strong following on his YouTube channel, where he focuses on social experiments, human psychology, moral questioning, and other intriguing topics. I first came across Luke due to an experiment he did a few years back dressed up as Santa Claus where he easily collected dozens of phone numbers from attractive young women – and have been following him ever since as his channel continues to tackle a wider array of questions. Recently, he also launched a confidence-building course called Imaginary Men, in which members can receive personal life coaching and relationship advice.

I have to start out by confessing that I’m a big fan of your YouTube channel, Luke. I first noticed you because of the Santa Claus social experiment you did with the /whatever team a few years ago. Briefly, how did you get started with YouTube, and do you have any current “partners” or are you working on videos independently these days?

Thanks for the kind words Jesse! I was one of the original founders of the /whatever channel. It started with a burning passion in my mind to start creating prank videos and things magically worked out beyond what I initially envisioned! After about 8 months of doing the pranks, I decided I would start a vlog channel (GoldJacketLuke) and do both the vlogs and the pranks at the same time. However, there were some business disagreements on whatever and I decided to leave that channel and focus fully on the GoldJacketLuke channel. I love the question Alan Watts proposes in one of his popular videos, “What would you do if money was no object?”. For me, my highest passion is discussing the ideas that I talk about on my GoldJacketLuke vids expressing my thoughts. :)

Your channel has really branched out lately, but in general, it seems you are passionate about psychology, moral questions, and beyond. Is that accurate? At the end of the day, what do you hope to accomplish with your channel, and which subjects are you most passionate about?

Yep, sounds accurate. I’m also very into dating advice as well as philosophy! At the end of the day, I hope to spread ideas that help people live more truthful, fulfilling, empowered, & passionate lives and have a blast doing it!

So on the dating advice thing… seriously now, where does your mojo come from!? How does a guy dress up like Santa Claus – let alone any of your other approaches – and come away with dozens of phone numbers from some of the most beautiful girls in California… in literally minutes?

Haha I was definitely a late bloomer with the ladies. You wouldn’t believe how awkward I used to be when talking to girls I was attracted to. I decided it was something that needed to change so took massive action on improving with women and have approached tons of girls over the last couple of years. Having a camera on me, my friends’ support, and knowing that millions would watch on youtube also helped motivate me on my more ridiculous stunts :P

I’m sure you are familiar with the so-called “pickup artist” scene, a.k.a. PUAs. Frankly, I’ve always found much of that scene degrading, not only because it encourages shallow relationships but it also seems to tell young men there is only a single, self-righteous alpha male “image” that is respected by society. I’m curious what you think about that scene, and how you relate to and/or differentiate yourself from it?

Yes, very familiar. Great questions and agreed. For me, the PUA scene actually initially massively helped me. It made me believe that I could improve with women, change myself, and gave me a path to do it.

So for that I commend the community and I think the PUA community does lots of good, however at the same time I think the scene does TONS of bad.

Most of the PUA culture is “the blind leading the blind”. Rather than having healthy role-models, insecure guys are following power-hungry misogynists who love the ego of “being the alpha guy who bangs hot girls”, rather than guys who genuinely love women and can connect with them in a real way. The PUA scene promotes a mentality of “conquering women” to feel good about your ego, rather than authentically connecting with women and being yourself. On the path to manhood I think going through a PUA phase could be extremely healthy for a man’s development (it was for mine) to overcome one’s insecurities. However, it seems like lots of guys get stuck in the scene which has a feel to it equivalent to a never-ending hole that just gets deeper and deeper the more you dig. The purpose of any dating advice should be to fall in love, something the PUA community ironically doesn’t talk much about.

I love talking about the PUA community haha, I find it very fascinating and curious how my message evolves as I’m sort of in the field.

Speaking of healthy role-models, I hear you are launching a new product – along with some other strapping young lads – that aims to provide some heart-felt advice to young men who are looking for some legitimate discussion on real life issues. Please explain, and plug away :)

Yep yep! It’s called Imaginary Men. It’s an audio program that I created along with five other personal development and dating coaches. The program is very different than traditional “self-help”. Imaginary Men is a fluid and inspired conversation where the six of us all coach each other on the current problems we face, talk about desires we’d like to explore, and share stories about our most transformative experiences from our life. The program is very unique in that we are extremely vulnerable — we share our deepest shames, our biggest failures with women, and lots of our embarrassing lowest lows from our lives. For example I share my “broken penis” story and Fred shares about how he lost his virginity to a prostitute. Some of what we shared in this recording was so personal and sensitive that it was our first time discussing it with anyone. If you are interested in personal growth, improving your social anxiety (included is a social anxiety virtual coaching bonus with ‘in-field” demonstrations), and improving your relationships with the opposite sex — I highly recommend you checkout Imaginary Men.

One of your most viewed videos currently is about the so-called “No Fap” movement that’s grown popular over the past few years among young males on the web. For our *less-informed* readers, can you briefly explain the meaning of the term, and how it has affected you personally?

From “No Fap” to “How To Get A Girlfriend” to “How To Not Give A Fuck”, your video topics run the gamut, to say the least! Where does your inspiration/knowledge come from? College professors? Ancient books? The internet? Is peer-to-peer learning via the web the future of “life” education? Who are some of your role models or people that you admire?

I first started getting into this field by finding Steve Pavlina’s blog several years ago. I instantly got hooked. I thirst for knowledge and really love ideas on how to improve yourself. Afterwards I’ve been hooked by several other “gurus” – Alan Watts has had a tremendous impact on me.

I’d say I’ve learned the most from other “gurus”, reading books, and from my real life experiences. I’ve also learned a shit-ton from my friend – dating coach Shogo Garcia – lately, and hanging out with him in person. The best way to learn is always real life experiences! And from all those sources the inspiration kind of just “flows” through me!

To finish up, how would you summarize yourself in one word? Where do you see yourself in the future as far as career plans, income, or life purpose? Could YouTube be a life-long focus for you, or – as you mentioned earlier – if “money was no object” what would you pursue? Any key advice for readers out there looking to launch a successful YouTube channel?

I see myself making YouTube videos for at least another 10+ years. Spreading ideas on how to live the best life possible is my passion. I want to get into public speaking in the future and be able to speak live to audiences. I’d also like to travel a lot more! It’s really tough getting started on YouTube now… the best bet is to start building your audience with content that can go viral (pranks, etc). And once you get an audience the momentum really helps! But whatever your wildest dream is, go for it and you might be surprised ;)