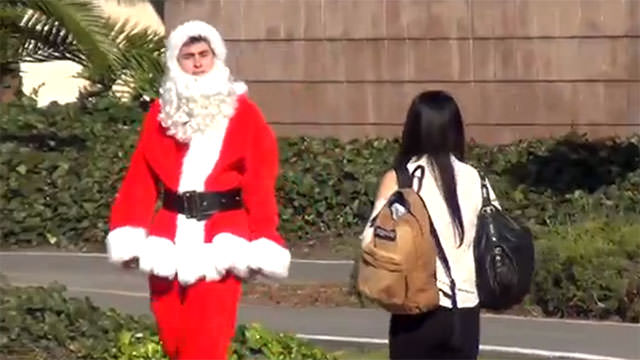 Turns out, it’s hard to say no to Santa Claus.

Or so went the theory that Luke Eilers sought to test in his latest “social experiment” video, posted yesterday to his popular YouTube channel. (Note: the video was actually filmed in 2012 but failed to gain much traction, hence the re-upload.)

In the video, Eilers dresses up as Saint Nick himself and strolls casually around the University of California, Santa Barbara campus, making overt romantic advances toward attractive female students, while referencing holiday songs of good cheer – and adding in a few blatant Santa-themed sexual euphemisms.

Eilers, a student at Santa Barbara City College, attracted serious attention earlier this year when he released a video called “Asking 100 Girls For Sex” followed by a similar video called “Asking Guys For Sex” which experimented with natural public reactions to straightforward sexual solicitation. The two videos, released in July 2013, have so far garnered over 15 million combined views at the time of writing this article.

“What are you doing, around like, December 25th?,” he asks one unsuspecting girl in the latest video. “Do you think I could I slide down your chimney?”

The rather amazing video shows Eilers easily collecting dozens of legitimate phone numbers from otherwise cynical young ladies, with plenty of genuine smiles balancing out the awkward laughter that so regularly follows when his targets react in shock, and perhaps initial confusion, to the filmmaker’s witty approaches.

Unfortunately, the experiment comes to an abrupt end when someone apparently calls the campus police to report Eilers for unwanted advances.

Luke Eilers is a YouTube filmmaker from California who focuses on social experiments, human psychology, and building personal confidence. You may read more at his website, www.goldjacketluke.com, or check him out on on Facebook or Twitter.

No Comments on “Social Experiment: Santa Claus Picking Up College Girls In California With Practically No Resistance”  (RSS)