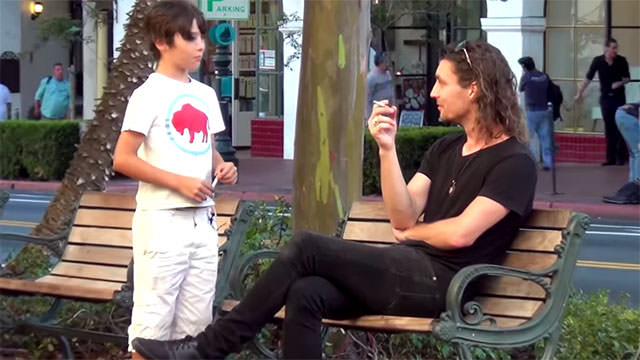 “Can I have a light?” asks a young boy to strangers in Santa Barbara, California.

The boy – a 9-year old known only as ‘Jensen’ – is undercover, mind you. But rather than working with local police as part of a sting operation, he’s the star of the latest public prank video filmed by the /whatever crew on YouTube.

In the video, Jensen is seen approaching various people who are smoking cigarettes in public places, asking them to borrow a lighter. In one case, a man recommends that he visit a nearby drugstore for a “free pack of matches.” But in nearly every other case shown on the piece, the smokers react in shock at his request, and some even attempt to grab his pack of cigarettes away from him.

Though the experiment starts off on a lighter note, it quickly becomes clear there is perhaps a deeper message involved this time around.

The anti-smoking stunt has already been compared online to this commercial from Thailand that employed a similar child-actor setup, among perhaps numerous others such as the U.S. based TRUTH campaign from the early 2000s.

The prank received a nice boost in attention after Ashton Kutcher shared the video on Facebook. Kutcher, who used to smoke up to 40 cigarettes a day according to some blogs, allegedly stopped his habit with the help of an increasingly popular book by Allen Carr, a self-confessed former chain smoker, called The Easy Way To Stop Smoking.

The /whatever team is a running favorite of CollegeTimes. You can also check our coverage of their Reverse Prostitute prank in Amsterdam and their holiday piece with Santa Claus picking up college chicks. The group often focuses on psychology-oriented social experiments that question the status quo.

No Comments on “Kid Smoking Experiment: How A Young Boy Asking For Cigarettes Makes Smokers Re-think Their Habits”  (RSS)