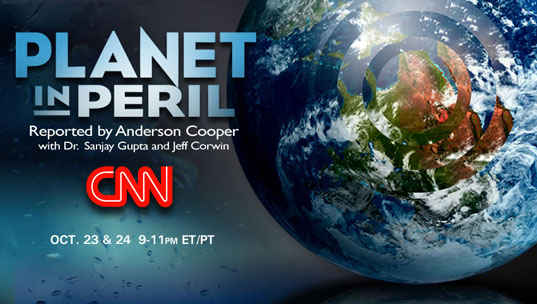 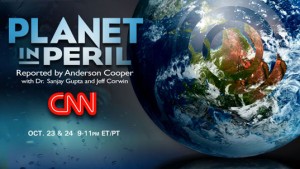 A two-part, four hour documentary that premiered last October 23, 2007 on CNN, Planet In Peril tends to investigate the current condition of the Earth, concentrating on four major areas: global warming, overpopulation, deforestation and species loss. With three renowned correspondents Anderson Cooper, Sanjay Gupta and Jeff Corwin, it examines the effects of population growth, rising temperatures, poaching (illegal hunting or fishing), gradual rising of the seas, melting of glaciers in the planet’s frigid zones, and others on the global environment. The documentary then shows the shocking current environmental situations of various places such as China, Madagascar, Brazil, Alaska, Chad, the Yellowstone National Park in the U.S., the Pacific Islands and Greenland.

After watching the lengthy yet very interesting CNN documentary, I’d once again felt an extremely strange feeling. I always feel it every time I catch myself viewing or reading something that is with relation to the environment. That feeling tends me to ask myself, saying “Why do these undesirable things happen?” or, “Are these things really happening on the surface of the Earth?”

Being a person who has not yet gone beyond the national border yet witnesses a number of environmental phenomena—both destructive and constructive, I was in a state of shock upon hearing that the gradual ruining of the planet occurs not only in a single location but also in many locations worldwide. Yes, I was very surprised that the world’s once green features have been rapidly dirtied by man’s selfish and insensitive actions. Because of man’s wrongdoings, the only place that we live in may be doomed to turn into a lifeless one; unable to support life, unable to support us.

Planet In Peril is indeed an effective eye opener of the current state of the Blue Planet. I was apparently moved by all its revelations. I guess if the illegal loggers, mining company employers, hunters and the government officials were to watch this, they would realize the mess they’ve badly done. They would be enlightened that what they foolishly do should be stopped as soon as possible.

The thing that interests me most is the poaching that is happening across the People’s Republic of China. The illegal hunting of tigers, bears, turtles, sharks and birds for medicine, keeping and food are totally alarming, especially when these organisms are declared to be endangered. These Chinese are so attached to their past and I definitely hate it. What I mean is that, there have been studies which prove that something bad would happen if they keep on poaching. The disorganizations of the food web and food chain would be the vivid results. If this is so, then why don’t they just put their guns and nets down and quit the said act. To continue such is too foolish and fatal. It tends somebody to dig his own grave or, stated otherwise, to kill his own self.

The rising of temperatures is the second issue that greatly struck me. I can’t believe that every burning or igniting that we do terribly contributes to the worldwide increase in thermometric readings. The temperatures rise then results to the melting of ice sheets, increasing of sea levels globally, and eventually, sinking of the low-lying islands and atolls. Well, there has already been a large volume of unfriendly carbon dioxide stuck in the atmosphere right now. If only we can accumulate again what we’ve released.

The third most fascinating feature of Planet In Peril is the illegal logging that is still happening today within the enormous and thick jungle of the Amazon Basin. According to the said documentary, there is a great chance that the treatments for cancer and other incurable-so-far diseases are found in a certain flora or fauna inside the diminishing rainforest. If this is the case, then it’s really necessary to stop the practice. It is so clear that the Amazon has something good to offer other than its lumber. Why don’t we give the scientists a chance to explore the depths of the place? Anyway, it’s still but for the betterment of the human race.

On the other hand, still in relation to the illegal logging in the Amazon, I find it so miserable that somebody who is just concerned about the future of our kind would be killed by someone whom she’s protecting for. Do we really need to end this thing up in a brutal way? If this will be the outcome of clearing the forests, then it should be put to closure. Illegal acts do result to illegal outcomes.

Meanwhile, among the issues presented, the saddest one that I witnessed is the effects of the continuous shrinking of Lake Chad. I know Chad quite much because I am fond of reading articles about geography. It is a third world country (but worse than the Philippines) somewhere in north central Africa that has only one major source of water and food which is also being used by three other nations. The present scenario of Chad nearly made my tears flow down. If you could just imagine, people feed themselves through an inch long fish caught there which can actually grow for about some kilograms more. Food scarcity and plague are really the foreseeable consequences. The drying of the lake is truly an ironic event knowing that Africa is the least carbon emitter yet, is the major victim of this environmental catastrophe. As what the first law of ecology says, “Everything is interconnected”. You may not be doing the bad one but if someone does it, you will be affected for certain.

The only lightest (or happiest) feature that I picked up in the documentary is the fact that there’s a quest allotted for us in search of the yet unidentified species of some organisms. However, this is never a total happy thing. Because of forest denudation, the eventual discovery of these species might be delayed or might never happen anymore. We humans are so unsatisfied about our lives. Because of our will to make ourselves contented, we forget to respect other creatures. We even take their habitats to put up our very egocentric dreams. This should not be happening. We are not the only creatures living in this world. An earthworm, a fly, a bacterium, everything, have their rights to exist. There would be no us without them. So, if we’ll try to eliminate them, it will then be the end of us.

In sum, Planet In Peril is an overseer of the present environmental events. It is also a way of mirroring what we have contributed to these serious things and what we should do to prevent the most crucial one from occurring. However, it’s just too full of negativities. I haven’t gotten any major good news on it. Maybe there’s really no sign of positive things going on that they may include. Oh well, out of 10, I’ll give it an 8. It is imperfectly interesting and valuable! It is worth remembering for. I must give a bow to the director(s), correspondents and staff.