Home » Cost Obsessions Map: From Prostitutes To Nose Jobs, The Most Researched Purchases Online By Country

Cost Obsessions Map: From Prostitutes To Nose Jobs, The Most Researched Purchases Online By Country 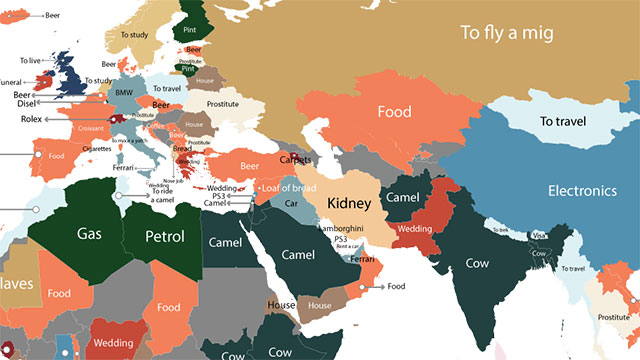 “How much does ___ cost?” is an apparently very interesting lens through which to judge countries – or more specifically, the obsessions of their (would-be) residents.

From “prostitutes” in Thailand, to “kidneys” in Iran, and even “slaves” in Mauritania, a new report published by Fixr.com compiles the most popular auto-completed searches on Google in relation to every country around the world.

See also: Best Countries: The Cheapest, Safest, And Friendliest Places For Freelancers (Or Anyone) To Live And Work

Using a simple Google search query, formatted as “how much does * cost in COUNTRY” the results were simply replicated and then collected into a spreadsheet.

An Honest Look Into Human Obsessions

Fixr, which is a cost-estimating website for home repair and remodeling, initially released a look into similar data for U.S. states only. After becoming “intrigued” by the results, the team says they “decided to see what the worldwide results” looked like:

It turns out that Google searches for the cost of something vary widely depending on the country of interest. For example, people are most interested in the cost of a passport or a patent in North America. As for Europe, many are concerned about practical things like the cost of living, studying, or buying a beer. Google users are interested in basic necessities such as food, livestock, and fuel in Africa. But if you look closely, you will find some more controversial search results, such as prostitution in Brazil, Ukraine, Hong Kong, and Latvia; slaves in Mauritania; a kidney in Iran; in vitro fertilization in Australia; and rhinoplasty in Korea.

The results are indeed both intriguing and often hilarious. “Prostitutes” were an obsession for multiple countries including Brazil, Uruguay, Ukraine, Bulgaria, Hong Kong, Colombia, Latvia, and Thailand. “Beer” was a focus of several countries (esp. in Europe), while “camels” and “cows” were a stand-out in North Africa and Near East states.

In South/Central America, common research included “funerals”, “coke” (undetermined which type), and “cost of living” while “Bic Macs” (Serbia), “divorces” (Trinidad and Tobago), and “honeymoons” (Maldives) took the cake in other places.

Perhaps one of the most bizarre findings in the report was that “vasectomies” was a top Google search regarding New Zealand, while “in vitro fertilization” was a rather contradictory winner for nearby Australia. In Russia, the cost of “flying a MIG” [fighter jet] was a similarly surprising find. The team ultimately concluded:

Looking at some of the most popular Google searches throughout the World reveals some cultural differences, but also many key similarities. It also provides insights into the sometimes-strange things people think about when they are alone.

Disclaimer: the report’s findings should not be considered scientific.

One Comment on “Cost Obsessions Map: From Prostitutes To Nose Jobs, The Most Researched Purchases Online By Country”  (RSS)