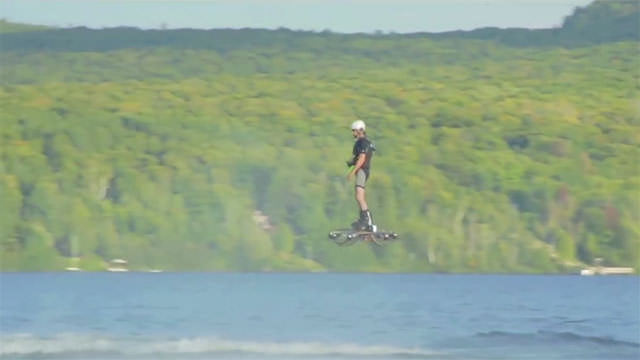 To be sure, this is not an April Fool’s Day stunt. (In fact, the below video was filmed and published by Guinness World Records themselves, so you can take comfort in knowing that you aren’t being pranked this time around.)

An inventor from Canada has set a new world record for “farthest journey by hoverboard” when he glided 275.9 meters (905 ft 2 in) over water a few months back, confirmed just this week by Guinness World Records. The inventor, Catalin Alexandru Duru, originally performed the feat at Lake Ouareau in Quebec, Canada on 25 August 2014, however the act was not mentioned by Guinness until a few days ago. The event has already lead some to wonder if the next extreme sport could be on the horizon.

Back To The Future – In Real Life?

Duru, understandably proud of his work yet seemingly cautious in discussing his self-created hoverboard technology, commented via YouTube:

“The first real-life hoverboard. The machine was built and designed by me, Catalin Alexandru Duru. I am the first man to create and fly a working prototype. I will showcase that stable flight can be achieved with a machine one can stand on and control with their feet, just like in the movie ‘Back to the Future Part II’. In our case, the machine is propeller-based. The prototype can be used anywhere, but is usually tested over water because of how dangerously high it can fly (which is ironic considering that the movie joked that it can’t).” – Catalin Alexandru Duru

Hoverboards, first popularized by the Back To The Future movie franchise in the 1980s, have been surrounded by rumors, conspiracies, and ill-fated attempts at replication ever since the movies first came out. Both fans of the films and researchers alike have debated the possibility of the “craft” for decades, with various types of technologies being mentioned including fans, propellers, magnets, gases, and beyond. Of course, the timely invention by Duru holds additional significance as October 21, 2015 was the date chosen by the BTTF movies as the “day of the future” from which to travel backwards in time, resulting in various web pages and other fanfare.

Duru said it took him a year to finalize his current hoverboard prototype. Many have compared the strange-looking machine to an octocopter drone often used by hobbyists to capture aerial video footage with GoPro cameras.