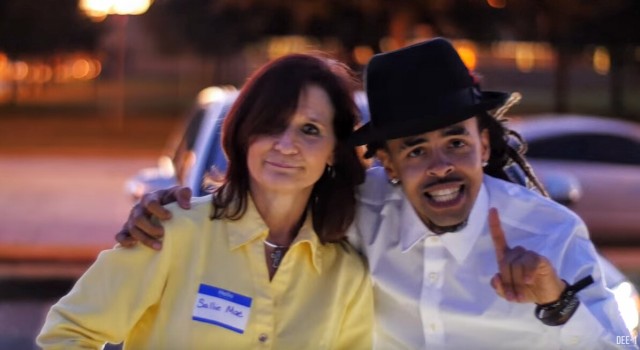 Department of Education employees are chuckling this week after a new rap song dedicated to paying off student loans went viral around the web.

New Orleans-based rapper Dee-1 is the lucky star, after his new track ‘Sallie Mae Back’ — which recalls his real life story of being able to finally pay off his student loans after signing a recent recording deal — struck a welcome (albeit perhaps bittersweet) chord across the US among millennials and beyond.

Sallie Mae is one of the largest student loan services in America, a quasi-government entity in charge of loaning federal money to college students.

“For those that doubted me yeah this is payback. And I been on my grizzy {​yeah}​ since way back. And no sir and I don’t drive a Maybach. But guess what I did?

I finished paying Sallie Mae back… Mae back.”

Although the YouTube video achieved over 100,000 views within a week of being released, it fared even better on Facebook where it’s already been watched over 1+ million times (in other news, it looks like Facebook’s recent focus on video content is paying off handsomely for content creators).

The team at Sallie Mae were quick to pay notice to the viral hit. One of their loan officers, Temeka Easter, posted on behalf of the company in the comments section of the video on Dee-1’s Facebook page:

“We’re all in the office singing along with you! Love, love, love the hook. Congratulations on your success!” #SallieMaeBack #Dee1Nation Temeka & the Sallie Mae team

Dee-1, whose real name is David Augustine Jr., graduated from Louisiana State University and became a Middle School teacher for several years in order to fund his musical dream. His new album also features a darker-themed track apparently inspired by one of his students who was tragically murdered.

The music video starts off with a disturbing reminder that current student debt in the US stands at over $1.2 TRILLION as colleges continue to raise tuition fees and increase the salaries of their presidents, while meanwhile very little is being done to halt the fraud and abuse being perpetuated by for-profit diploma mills.