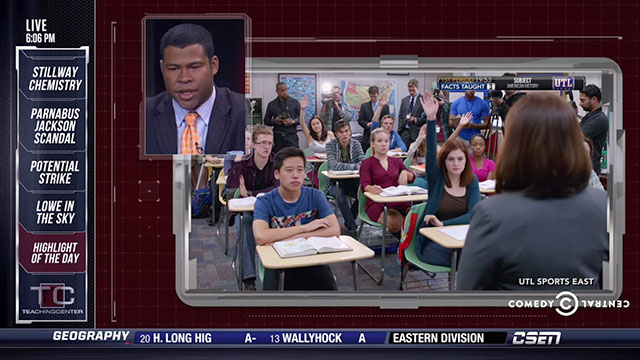 Sometimes, satire is the only good way to make a point.

In this example – when whacking at balls and sticks earns you millions of dollars a year, while teaching and inspiring (in theory, anyway) young minds barely breaks $40,000 average salary across the United States – to parody the most watched sports show in America is a pretty effective way to show just how ridiculous, perhaps, our country’s obsession with athletics vs. mental substance has become.

The below video, which was produced by Comedy Central’s Key & Peele, spares no detail in fully replicating the flashy graphics of ESPN’s SportsCenter show in an effort to poke fun at the decidedly serious nature of sports news in America.

“For the first pick, Central Rapids High takes… calculus teacher Mike Yoast from Tulsa Teachers College,” one segment of the video reports, emulating a professional sports draft round. “And just like that, you’re a millionaire. Ha ha,” chuckles the announcer, “Mike Yoast is an unbelievable story, his father living from paycheck to paycheck as a humble pro football player. Kid was a natural mathlete.”

Other hilarious bits in the video include a BMW-sponsored teacher profile, who races around town in a BMW while eating an apple, and a breaking news story that a “teacher’s strike” is threatening to upend the “season.”

Now, I’m not a blind supporter of teachers or their unions by any means. Like many other professions, there are plenty of lazy, greedy, incompetent, or abusive instructors out there, and teachers unions only seem to exacerbate bad habits. That being said, it is interesting that those assigned to nurture our children and prepare the future American workforce are rather, well, under-valued, compared to some developed nations, not to mention that several other countries (i.e. China, Turkey, Egypt) maintain much higher cultural respect for the teaching profession than the US.

But here’s the difference: while professional athletes are indeed offered insanely lucrative contracts, those contracts are 100% dependent on performance – both past, and future – in contrast with teaching, where pretty much anyone with a degree can get a teaching job (along with the benefits, holidays, and union protection that comes with it).

The satire video has already inspired renewed calls from liberals/leftists for higher teacher salaries in the US – it begs the question, then, why such activists are not more open to teacher performance reviews and things like charter schools, which allow “rich” donors to support the school while students benefit from free education. From the sidelines, it would seem that these union-obsessed anti-reform activists want to have their cake and eat it too, all at the expense of the American taxpayer.

Back before professional sports were such an obsession – and when schools in America were usually private – sponsoring schools with large donations was a very common thing among wealthy philanthropists. While this trend still exists for prestigious universities, private primary and secondary schools are rapidly dying out in the US, making things like teacher salary largely a governmental (and therefore tax-dependent) issue. Therefore, rather than simply chastising the sports industry (etc), perhaps the education sector in America could learn a thing or two from them.

Author’s Note: Pro sports teams are often much less profitable than people realize, as team ownership (and player salaries) have become mostly a vanity metric. For precisely that reason, perhaps team owners can stop accepting tax subsidies for their sports stadiums, and return some of that tax money to schools, instead.