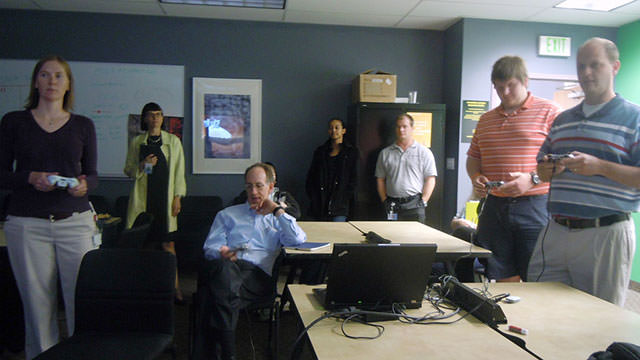 Below is an exclusive CollegeTimes interview with L. J. Deviny, the former Financial Services Director at Neumont University, a for-profit technical institute based in Utah. Followers of CollegeTimes know that we’ve had several run-ins with Neumont over the past few years after we refused to remove negative student reviews posted on the school’s profile. After we refused to accept his bribes, Neumont’s CEO Edward “Ned” Levine threatened me and stalked my family members in California, before suing my web design company in federal court. I promised him that I would continue to expose his misdeeds for many years to come. Yesterday, a Neumont employee, Kristi Robertson, tragically died after recently losing her husband to cancer, and Deviny claims that Levine was responsible for pushing her beyond her limits. Despite being forced to sign a “stack of legal papers when they terminated me that I would not disclose what I knew”, Deviny decided to come forward to offer disturbing insight into the illegal business practices and bullying conducted by Mr. Levine. According to Deviny, he was fired on his 55th birthday because he “no longer possessed the ‘youthful vibrant image’ Neumont wished to portray to their students. I had hired Kristi so after they terminated me, there was no one to protect Kristi from Ned’s bullying and abuse.”

Update 9/12/2014: Less than 24 hours after this whistleblower interview was published, Neumont University CEO Ned Levine went into bully-mode and served Deviny with a lawsuit (that is, on Thursday evening, September 11, 2014). Developing…

How did you first come to work at Neumont University, how long did you stay, and what was the hiring process like? Are you a native of Utah, or a transplant, and briefly, what is your career background?

I was hired by the original CFO, Maurine Findley. Maurine and I had worked together previously. Northface hired a Director of Finance, Lisa Oakes-Gale, originally in 2004 when they began enrolling students. Lisa was not qualified for this position and within one year, they were in serious problems with late refunds and federal audits. Maurine contacted me January 2005 to come clean up the mess and get things back on track. I’m originally from Spokane, WA and moved to Utah for my career in 1990.

From my understanding, Neumont has shifted business strategies several times, including failed campus locations in Virginia, Rhode Island, and even Massachusetts. Who is behind all of these sporadic decisions?

The original President, Graham Doxey, wanted to start the campus in Virginia. Zoning problems led to the cancelled start but all of those students received 100% scholarships to the Utah campus. I thought that was extremely generous of the management at that time. The Doxey’s are outstanding people who treated others with respect and dignity. They took the expenses for their poor judgment in trying to have a location in Virginia and the students received a FREE education. But then Graham had to go and Ned was put in his place by the investors (Great Hills).

It sounds like the investors at Great Hill Partners were not amused by Doxey’s generosity. Do you know how or why they decided to hire Levine to run Neumont’s computer science programs, despite his only having a bachelor’s degree from an art school in Rhode Island?

I do not have knowledge on how Great Hill Partners came to hire Levine.

What was working at Neumont like with Ned Levine as President? A former student, Jason Aquino, claimed that Levine harassed him and other students at the school. Another student, Ryan Elkins, was “banned” from campus after starting a blog talking about some of his experiences at Neumont. The CollegeTimes team was also bribed and then threatened by Levine as well. Does Mr. Levine maintain a carrot/stick attitude with his employees? What did you witness happen to Kristi Robertson in particular?

Ned is an arrogant asshole and bully. The only way I was able to function was by the protection of the 2nd CFO, Thomas Bickart. Tom and I had an agreement that Tom would keep me safe from Ned. I don’t know how Tom did it, but Ned was not allowed to talk to me nor my staff, Alice Crutchley and Kristi Robertson. Alice was the Financial Aid Officer responsible for the incoming freshmen. Kristi was responsible for the continuing students. Ned hated me, Alice, and Kristi because we were hired by the Doxeys. Ned systemically eliminated all employees who were hired prior to his coming to Neumont. We did not have any pay raises for seven years although other employees (those Ned hired) regularly received increases. In the fall of 2012, Tom told me Ned was going to let Alice go (for no cause – her performance was outstanding for her entire length of employment). Alice was able to secure a financial aid officer position at ITT Tech in SLC and is still there.

Thomas Bickart resigned from Neumont in February 2013. At that time, I was told my employment was also terminated. I lost my protection from Ned. They paid Kristi Robertson a $5,000 bribe to stay at Neumont. Ned brought Nate Blanchart from the Admission department to the financial aid department. They demoted Kristi to a financial aid clerk. Nate only has a high school diploma and no financial aid background. Kristi had a Bachelor Degree and a decade in processing Title IV Federal Student Financial Aid. Still, Kristi, stuck it out in hopes to prove to Ned she was a valuable employee. In July 2014, Kristi’s fiancee’, Ron Capson, died while undergoing a bone marrow transplant to combat his reoccurring cancer. Neumont seemed to work with Kristi during this difficult time but two weeks ago, Kristi was notified they were terminating her employment. A new financial aid person began last week. Kristi was crushed to the core. She felt Neumont was kicking her while she was already down. Over this past weekend, Kristi went into a diabetic coma and now has no brain activity. Her family has decided to not prolong the pain and will take Kristi off of life support today.

In your opinion, was Ned Levine responsible for Kristi’s death, by firing her just weeks after her husband died from cancer and not giving her the respect and loyalty that perhaps she had given Neumont University?

You mentioned earlier being forced to sign several non-disclosure documents at the time of your termination. As Financial Services Director at Neumont, did you witness any blatantly illegal or immoral practices as far as recruiting, financial aid, under-qualified faculty, etc? Are Neumont’s claims of 100% employment and $60,000 average salary for graduates accurate?

Not under MY watch – another reason I had to go. I would NOT allow any illegal or unethical practices in financial aid. I also was responsible for signing off on the placement statistics. If you look very closely at all the *asterisks and small print, Neumont was sure to CYA. Obviously Jason Aquino didn’t get a job so that’s not 100%. The starting salary included travel, education benefits, and other costs. Many students that did not find employment with an employer where reported as self-employed – and of course those students would inflate their potential earnings. But as a whole – the great majority of students found fabulous employment at terrific wages. Ned would not accept any thing less than 100% from Career Services. Shawn Louenstock refused to falsify the reports, so of course, Shawn had to go, too.

As a “university” focused on “computer science” that lacks ABET and regional accreditation, it seems like Neumont has refined their target enrollment to go after “loner” types of high school students who love video games, which the L.A. Times referred to as a sort of “Geek Heaven”. Do you have any comments on that approach, or insight into Neumont’s acceptance rate?

I’m very surprised they have been allowed to retain the University distinction. Their Master’s program has been dark for about four years and they have no research being conducted at all. But accreditation with ACICS is pretty much a joke anyway when comparing Neumont to regionally accredited institutions. But I also have to state, the curriculum is EXTREMELY difficult and students without a solid math background and excellent time management skills are not able to keep up with the fast pace and withdraw. The acceptance criteria is more than a community college but substantially less than most four year State Institutions. The acceptance criteria changed each year much to the distress of the acceptance committee and the faculty.

Living and working in Utah, where the majority of residents are Mormon, would seem to be a unique experience. While Neumont has no official ties to the LDS church, our team has found it interesting that their founders, investors, board of directors, many faculty, and even their attorney, are Mormon. Did you witness anything to suggest a close connection between Neumont and well-connected members of the LDS community? Or, are the lines perhaps quite blurred in Utah because of LDS saturation?

It’s just Utah and LDS saturation. The Doxeys are active LDS but they NEVER brought their religion to the workplace. Unless you want to say being ethical, moral, honest, above reproach, treating others with dignity, respect, and kindness is a Mormon only thing :-)

Ned’s a Jew. And that’s not saying very much about the Jewish faith – IMHO.

From talking with you, clearly there ARE people in the for-profit industry who believe in honesty and do not support fraud (but they may not last long at some institutions). You have worked at multiple for-profit colleges, including ITT Tech. Looking back, has your opinion about for-profit higher education changed over the years? Currently, what do you believe?

Since May 2014, I now work for the Biomedical Informatics Department at the University of Utah. I am SO GLAD to be out of the rat race that is for-profit proprietary education. It’s a dog eat dog field with no winners. Not the students. Not the staff. And certainly no longer the share holders.

I’m sad to see the Gainful Employment Regulations defeated and not implemented. That would have put all the frauds out of business for good. Most of the fraudsters are now just switching to being a non-profit in order to side step the regulations.

I’ve enjoyed sharing my insights with you very much. It is helping me deal with Kristi’s abuse. I didn’t state this before but Kristi was a very large person, Alice needed major dental work, and I have strabismus (crossed eyes). These physical limitations did not impact our ability to do an outstanding job year after year. Ned has wrongfully terminated so many employees that refused to bend the rules or were old or not physically perfect. Jason Aquino was a very special student to me. I sent him job leads in CA. I really want Jason to be happy and successful. Please send him my regards if you speak to him, again.

Thank you for your time and best wishes to you always.